Monkeys for sale delivered to your door for under $20 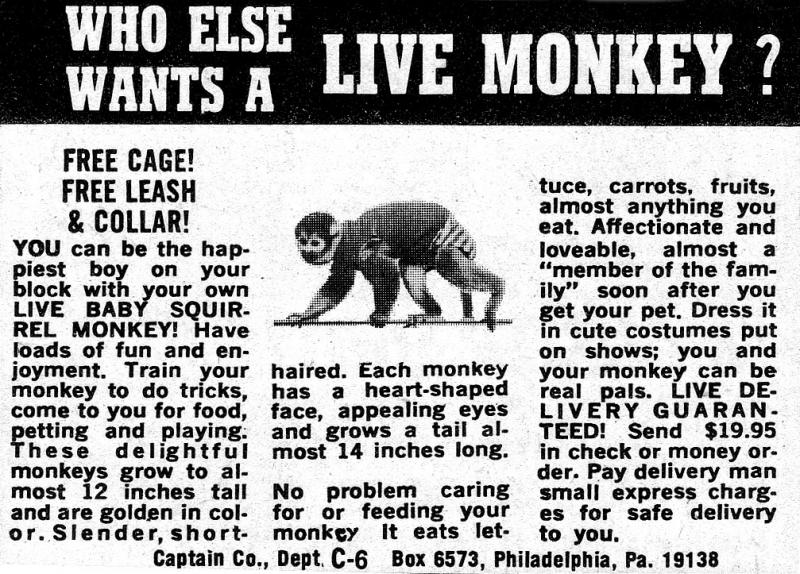 Anyone who pokes around fiendishplan.com and comes across the Random Images gallery will notice that I have collected a number of old comic book advertisements. Most of the ads I collect promised strange animals that seemed incapable of being domesticated and at the very least shouldn’t be left in the care of the average American child. My favorite were ads for pet monkeys.

Forget for a moment the practical side of monkey ownership and try to see the world through my (9 year old) eyes. I just returned home from a garage sale with a big box of comic books, after throwing out the Superman’s pall Jimmy Olsen and ripping up any Lois Lane and romance comics for fear of some nosy friend finding them I usually would still have enough comics to entertain me for days.

Most of these comics contained ads for novelty pranks such as whoopie cushions and xrays specs. One ad that always caught my eye was by a company selling squirrel monkeys for the ridiculous low price of $20!?! Even taking into account inflation this was still hard to believe. I remember reading old comics and thinking I had missed out on some golden age where any American child could have his own pet monkey. I showed one of the ads to my mother and she convinced me that it was some sort of scam. I’d like to believe her reaction was due to adult cynicism but it’s more likely that she wanted to kill any budding hope I had of becoming a expert monkey trainer. Even as a child I had to admit it seemed pretty unbelievable. How likely was it that you could just put a monkey in a box and send it across the country. I was under the impression that monkeys couldn’t be low maintenance pets. Besides (I thought) someone had already sucked the fun out of life with stupid rules, if the hardware store wouldn’t sell me dynamite on the 4th of July and expected me to believe they didn’t even carry it, what chance did I have of getting my own monkey. Their was no way you could just put a twenty in a envelope, wait a 6 to 8 weeks and have a monkey delivered right to your door.

Years went by, I became older and gave up on my dream of monkey wrangling. For no real reason one day I searched for “squirrel monkeys comics for sale” and came across something that shocked and amazed me. Monkeys really were for sale in the back of comics. People could and did own them. George Khoury at Comic Book Resources even interviewed some people who were monkey owners. Read all about it here.

Here’s a story of someone who actually bought a monkey from a comic book https://www.cbr.com/comic-book-squirrel-monkeys/

The following link proves that I own this domain for use with the Mastodon social media platform @fiendishplan on indieweb.social